Watch our best homegrown talent proudly representing the region on the national stage with a 2022-23 Newcastle Falcons season ticket membership.

Existing season ticket members renewing in February can enjoy a 25% discount compared to match-by-match prices over the 15-game package, with that rate including a credit for the cancelled Boxing Day game against Sale Sharks.

New season ticket members booking in February can still enjoy a 15% discount compared to match-by-match prices, with that figure moving to 10% for bookings made from March onwards.

With the ultimate goal of preserving professional rugby in the North of England we’re dedicated to fostering our regional talent and giving them the opportunity to showcase their ability at Premiership level. This, combined with the quality players that have been added to the squad from further afield, means 2022-23 is shaping up to be an exciting season, with season ticket memberships by far the most cost-effective way to enjoy the action.

“It’s incredibly important that we have a team which represents our region, and I want at least 50% of our match-day squad to be home grown talent,” said director of rugby Dean Richards.

“As well as the outstanding rugby ability we have on our patch, brought through by our fantastic academy system and all of the great schools and junior clubs, having a core of homegrown players just gives you that connection with your supporters.

“Our academy has produced more than 50 international players, and in the calendar year of 2021 alone we had more than 20 Newcastle Falcons players involved in various England squads. It’s central to everything we’re doing, and if you combine that with the outstanding support we get from within the region then the long-term foundations are really strong here.

“Our season ticket members are our core – they’re the guys who come to every game and enable us to grow – and if we can keep increasing that number and get them supporting the lads as they progress through the academy, I just think it’s a really exciting future for them and for everyone at the Falcons.”

This from the club who made history by fielding the Premiership’s first all-English match-day squad back in May 2006, defeating Leeds 54-19, and whose commitment to homegrown talent remains as strong as ever.

book your season ticket membership for 2022-23

To purchase the £42 season ticket for U16s please contact the ticket office. Alternatively, call us on 0191 214 5588 (option 1), or pop into the Kingston Park ticket office during opening hours. 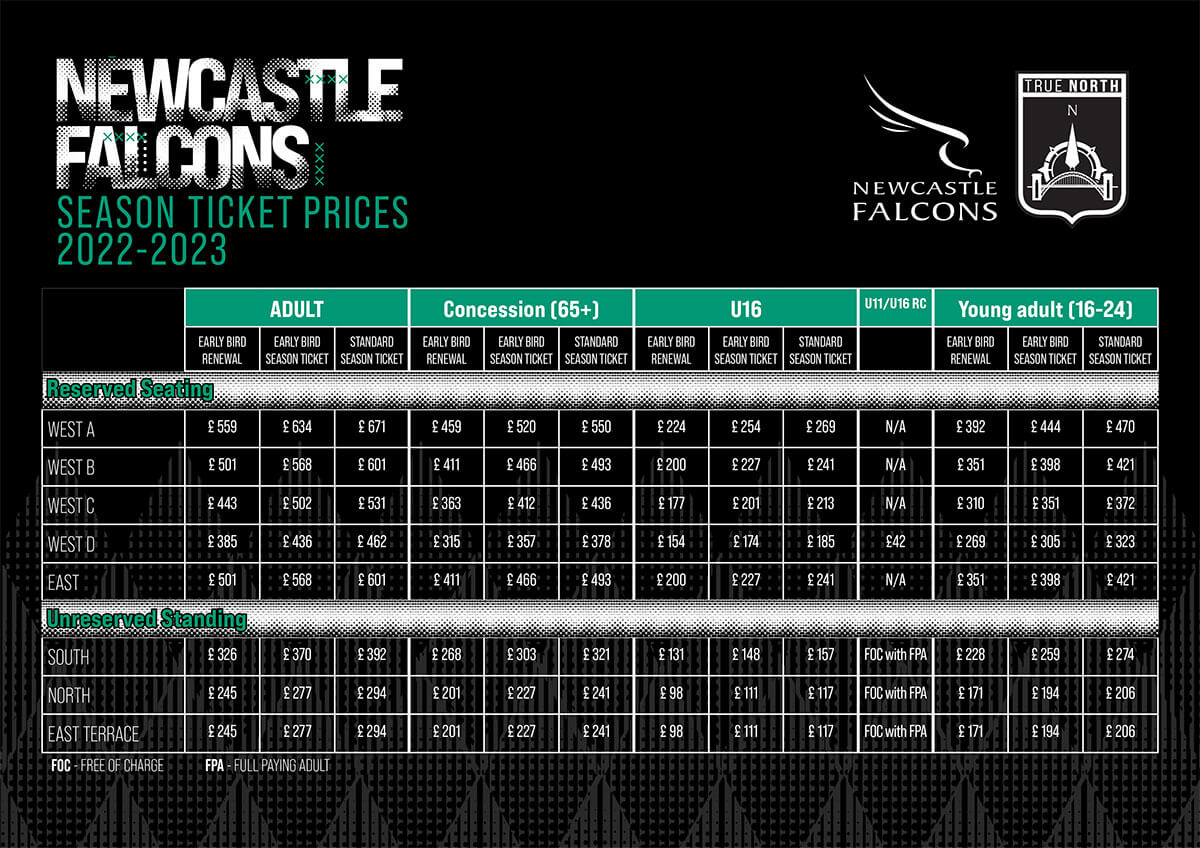